Blood -  A fluid consisting of plasma in which many substances and nutrients (such as glucose) are dissolved. Blood is also composed of white blood cells and red blood cells (erythrocytes) and contains platelets for clotting. Blood carries other gasses, urea and hormones around the body and travels through the blood vessels.
Heart - the organ that pumps oxygenated blood to the cells of the body and pumps deoxygenated blood out of the body (to the lungs).

Blood is a tissue with many different components...​

Plasma
Approximately 55% of blood is plasma (the substance) and plasma is approximately 95% water. Water has chemical properties (such as polarity) that make it a really good solvent (fluid that dissolves solutes) which is essential for plasma as it is where nutrients such as glucose are dissolved. Carbon dioxide produced as a waste product of aerobic respiration also dissolves into the plasma. Plasma carries blood cells, hormones and urea around the body in the blood.It also distributes heat around the body.
Red Blood Cells
Red blood cells (erythrocytes) carry oxygen around the body for aerobic respiration. They contain a lot of haemoglobin in their cytoplasm which is an iron-containing protein that reacts temporarily and reversibly with oxygen: $$ haemoglobin + oxygen \leftrightharpoons oxyhaemoglobin $$
Oxygenated blood is blood with oxygen while deoxygenated blood is blood without oxygen.
Red blood cells have no nucleus so they can contain more haemoglobin and have a biconcave structure which aids diffusion. The biconcave structure increases the surface area of the blood and, combined with the lack of a nucleus, allows the blood cells to be flexible for when travelling through capillaries. It means, however, that blood cells only live for a few months (average of 120 days) as their membranes are worn away and they lack many organelles like the nucleus. Thin membranes also help with diffusion. RBCs are made in the bone marrow of some larger bones like the femur. 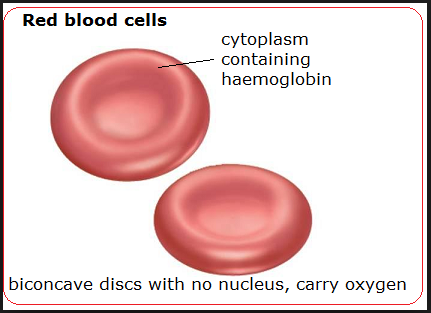 link to source
Platelets
Platelets are cell fragments used for clotting blood to prevent excessive blood loss when wounded. When you are cut, the blood vessels constrict to reduce the speed of blood flow and thus blood loss. The tear in the blood vessel causes collagen fibres to react with the platelets, causing the now glue-like platelets to gather at the site of the wound. The air that the platelets and tissue are exposed to cause them to produce a chemical that causes a soluble plasma protein (fibrinogen) to change into insoluble fibres (fibrin) which hold the tear together and eventually aids in the reparation of the blood vessel. Before the vessel is repaired, blood cells get trapped as opposed to spilling out forming a blood clot which tends to develop into a scab.

​Phagocytes and Lymphocytes
​There are many types of white blood cells including phagocytes and lymphocytes whose main function is to protect the body from  pathogens.

About 70% of wbcs are phagocytes which ingest pathogens and microorganisms via phagocytosis ('cell-eating'). Phagocytes are large cells with a lobed nucleus that ingest and destroy cells by changing their shape (which they can due better due to the nucleus'  shape). When a phagocyte detects antigens on a cell that shouldn't be in the body, it will change its shape to produce projections of their cytoplasm (pseudopodia) which surround the microorganism and ingest it into a 'vacuole'. Then, digestive enzymes are secreted into the vacuole to break down the microorganism, killing it.

link to source
About 25% of white blood cells are lymphocytes which create chemicals called antibodies - soluble proteins in plasma that destroy pathogens. Lymphocytes are around the same size as red blood cells and have large spherical nuclei. Antibodies work by attaching themselves to antigens - chemicals on cell surfaces that effectively identify cells. The antibodies which are produced by the lympocytes (some of which are on lymphocyte membranes) help to destroy pathogens by:Some lymphocytes develop into memory cells which stay in the blood and are ready to reproduce and produce pathogens whenever they recognise a pathogen they have 'seen' before to allow a quick response - immunity.

Humans have a double circulatory system which pumps blood to the lungs then back to the heart and round the body. It is more efficient than a single circulatory system like that found in a fish. The part where blood is pumped to and from the lungs to be oxygenated is called pulmonary circulation while the part that pumps oxygenated blood around the body is called systematic circulation.
​The Heart is essential to circulation and has many parts: 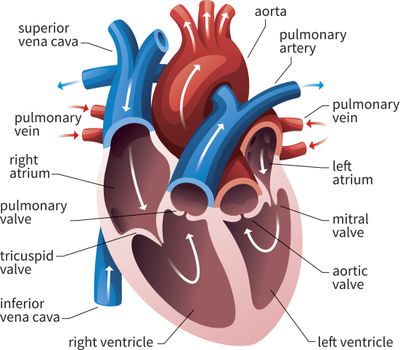 link to source which goes into extra detail about the heart
* The mitral valve is also called the bicuspid valve
*The tricuspid and bicuspid valves are often referred to as the atrioventricular valves
to remember which valve is which, the 'ri' in tricospid is the begining of ri​ght
*The aortic valve and the pulmonic (pulmonary) valve are often referred to as the semilunar valves
*The wall between the right side and left side of the heart is called the septum and prevents the mixing of oxygenated and deoxygenated blood
The Cardiac Cycle
The series of contractions and relaxations that move blood around the heart and thus around the body is referred to as the cardiac cycle: The atria walls are thin and can be stretched to receive blood but also contract enough to push blood. All the valves only allow blood to travel in one direction and the cardiac muscle that makes up the heart wall doesn't fatigue. In the heart wall, there is a group of specialised cells called the pacemaker (SA node) which causes the atria and ventricles to contract via electrical impulses.

CHD and CVD
Coronary Heart Disease (CHD) is the result of a build up of fatty substances (like cholesterol) that causes blockages in the coronary artery which can impede the blood supply to parts of the heart. This could prevent the cardiac muscle cells from respiring and prevent them contracting, resulting in heart attacks. It can be caused by (risk factors): Some of the above factors may influence each other, for example: a diet high in fat increases blood pressure, as does stress
*high blood pressure causes atherosclerosis - damage to arteries that result in white blood cells moving in though they produce fat in the process
Risk factor - something that increases the risk of an event occurring
CVD - cardiovascular disease - the same issue (build up of fat in blood vessels) but somewhere else in the body (anywhere)

​Heart Rate
​The average human heart rate is around 70bpm (beats per minute) though this varies. Generally, the more athletic you are, the lower your heart rate when resting. Your heart rate changes according to the amount of energy you need/are using. When we exercise, our muscles need more energy so our heart rate increases...
Other scenarios that affect heart rate are:
Hormones are carried in the blood and can affect the heart rate as well.