Weathering:
Acid rain: When acid rain falls onto rock, the acid can react with weak minerals causing them to dissolve and the rock to decay.
Biological: The roots of regetation can grow into cracks in rocks, causing them to split.
Salt crystal growth: This happens because sea water contains salt. Spray from waves can evaporate leaving the salt behind. The salt crystals grow and create stresses in the rock, causing it to break down into smaller fragments.

Mass movement:
Rockfall: When fragments of weathered rock from a cliff face fall under gravity and collect at the bottom.
Slumping: This often happens when the bottom of a cliff is eroded by waves. This makes the slope steeper and the cliff can slide downwards in a rotational manner rain often triggers it as the water lubricates the rock as well as making it much heavier.

Geological structure:
A rocks structure can affect the rate of erosion and the landforms that are produced.
Rocks that are well jointed or that have many faults, such as limestone will erode more quickly and rock that have fewerjoints will be harder to erode by the sea.
Rocks such as chalk have lines of weakness known as bedding planes that allow the sea to erode them more easily.
The type of rock also affects the rate of erosion: Cliffs made from resistant rock such as granite, will erode slower than cliffs made from less resistant rock such as clay.
Also the way the rocks are alligned:
In a Concordant coastline, the rocks are in layers that are parallel to the coastline. If the sea erodes through the hard rock, it will quickly erode the soft rock behind which creates a cove e.g. Lulworth cove.
In a Discordant coastline the layers of rocks are perpendicular to the coastline. The soft rock os eroded more quickly, creating bays and the hard rocks become headlands.

​Landforms of erosion:
Wave-cut platforms: These are created when the sea erodes the base of a cliff, leaving a wave-cut notch. Eventually the notch becomes so large that the cliff can no longer support itself as the whole cliff collapses. As the cliff collapses, the rubble is washed away by the waves, causing corrasion and forming a wave-cut platfor. Through this repeating process, the coastline reatreats father back inland as a result of coastal erosion.
Sea arches, stacks and stumps: A large crack can be opened up to form a cave through erosional processes such as hydraulic action. This cave will get larger and larger until the back wall is broken through and it becomes an arch as more erosion happens. Weathering can weaken the top of the arch which will cause the arch to collapse mand form a stack. Over time the stack willbe eroded to form a more rounded stump. In the future, as more erosion happens, the stump will no longer be vivible above water as it will have been eroded so much that it wont be tall enough to come out of the sea.

Longshore Drift:
When a prevailing (the strongest) wind causes a wave to arrive at the shoreline at an angle, longshore drift may occur. This is because the swash carries the sediment at an angle up the beach but due to gravity, the backwash is always at a 90 degree angle to the beach and so the sediment is moved along the beach.
There are three landforms formed by longshore drift:
Spits: Spits are formed when longshore drift carries on depositing sediment in a straight line after there is a sudden change in angle of the shoreline such as a headland. The spit will keep growing until a the current of a river removes the sediment as fast as it is deposited. Salt loving plants grow and their roots keep the mud behind the spit together. This is called a salt marsh.
Bars: A bar is a spit which has grown across a bay, joining two headlands and creating a lagoon.
Tombolos: A tombolo is a spit that extends to join an island to the mainland.

​Sand Dunes:
Sand dunes are formed when sand is blown up the beach by a strong wind and it gets stuck inbetween the roots of a plant called sea couch (the roots help to bind the sand together). When the dune reaches around 1 meter tall, the sea couch is replaced with marram grass, but around the yellow dune, which is about 2 meters tall, the marram grass dies to form a thick humus layer ​and less sand builds up now. Around 200m from the coast are the fixed dunes where marsh plants and small willow trees grow. Then, as the soil develops closer to 300m from the coast, lichen, moss and flowering plants grow on the dunes.
Coral reefs:
Most coral reefs are between 30° North and 30° South of the equator and they are unevenly clustered. Most of the clusters are in Indonesia/Australasia and around the carribean. Few re found near South America or Africa.
Coral reef formation: Corals are colonial species made of many animals called polyps, and around the polyps are tiny algae called zooxanthellae. The algae make energy from sunlight through photosynthesis for the polyps and the polyps provide a home for the algae in a symbiotic relationship. The zooxanthellae give the coral its colour.
Optimal conditions for coral growth:Mangroves:
Mangroves are located in tropical and subtropical climates, and are found on coastlines in the intertidal zone (between the low and high water marks). They need the low oxygen soil and slow moving waters for fine silt to accumulate. The roots allow the sediment to accumulate because of their density.
Mangroves stabilise the coastline, reducing erosion from storm surges, waves and tides, and their roots also provide shelter and food for many species so they are very important.
Like coral reefs, mangroves are also found between 30° North and 30° South of the equator. 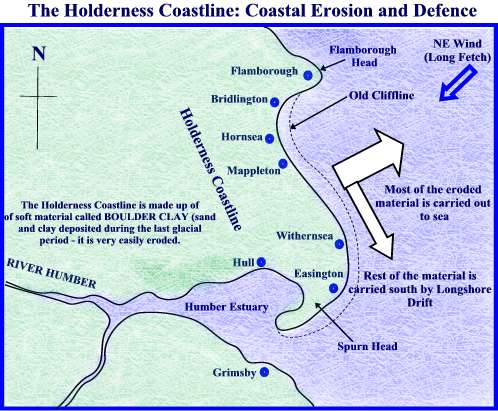 The Holderness coast is on the north east of England and is one of the most vulnerable coastlines in Europe as it retreats at a rate of one to two metres every year. For example, the village of Mappletin, perched on a cliff top on the Holderness coast has approximately 50 properties but due to erosion of the cliffs, the village is under threat.
There are several reasons why the coast at Holderness is eroding so quickly: Management Strategies:
Bridlington is protected by a 4.7 km long sea wall
Hornsea is lso protected by a sea wall along with groynes and rock armour
Coastal management as Withersea has tried to make the beach wider by using groynes, and also uses a sea wall to protect the coast
Mappleton is protected by rock groynes
Spurn Head is protected with groynes and rock armour
Great Cowden isn't protected.