When data is stored, it needs to be stored as a specific type of data so it can be used in specific ways. A variable can be declared a constant so it never changes in the code. Some data types are: string, integer, float/real , and Boolean.
<
>
H
i

Traversal, Concatenation and Slicing
String Traversal - Using a loop to cycle through each character of a string
Example: Concatenation - joining 2 or more things together (in this case, strings)
Example: This displays: SciGo

Slicing - extracting part of a string
Example: The above code displays: Scigo Computer Science
SUBSTR (a, b, c) extracts a string from the first index put in (a), to the second (b) to from the string (c) and is used in line 7 above. This function is called substring.

Characters
ASCII - American Standard Code for Information Interchange
ASCII is the most commonly used system for characters in coding.
Each character in ASCII has a (binary) number equivalent. Here is a table of some of the ASCII values: 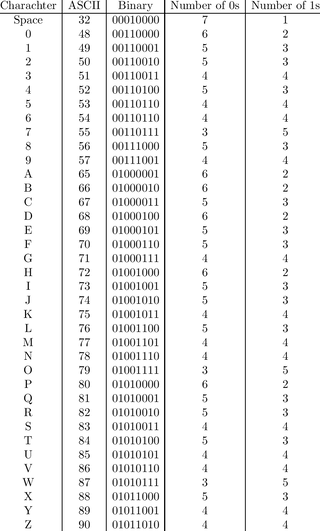 source of image above
Both integers and reals can be used mathematically but integers take less memory and storage space than floats.
​The mathematical functions are:
The order of operations in computing, as in maths, is: BIDMAS (brackets, indicies, division, multiplication, addition, subtraction)
Boolean Data can only have 1 of 2 values: True or False. This is represented as 1 (True) or 0 (False). Selection is an example of where Boolean logic is used to see whether or not a condition is the case.
AND is a Boolean operator as well as OR, NOT and XOR.
The output of each for different inputs can be shown in Truth Tables. In other words, we can make a table that tells us the result/outcome when we put something into each operator. Here are the truth tables for each, the output is on the right of the vertical line.
link to source