<
>
​Standard of living is the level of wealth, comfort and necessities available to an individual in a specific area.

Quality of life is the comfort and well-being felt by an individual in a specific area.

Development is the progress sociably and economically to improve the standard of living.

There are many ways of measuring Development and finding patterns. Look at the map below. This is call The Brandt Line and it shows how the north of the line is richer that the south of the line. These different parts are called The Rich North and The Poor South. 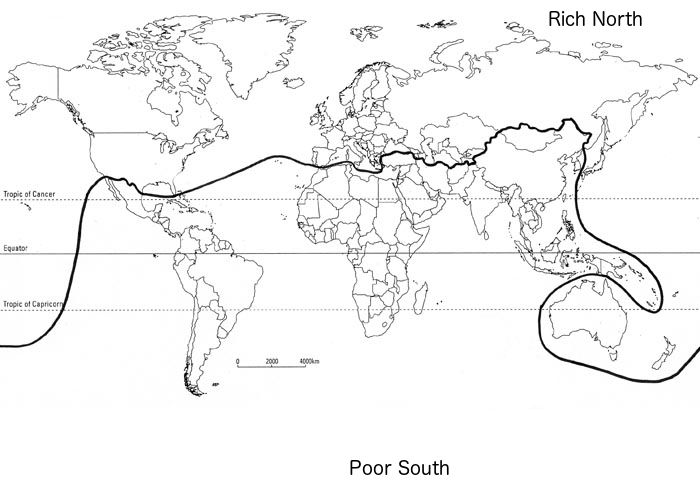 However, the Brandt Line has a few disadvantages such as:
So another way of showing development was needed.

GNP (Gross National Product), GNI (Gross National Income) or GDP (Gross Domestic Product) is the total value of goods and services in a country, measured in US Dollars. However, GNP per capita (per capita means per person) isn't the most accurate way of measuring development because it doesn't include productive activities such as subsistence farming which is simply farming but not selling or trading any of the products and instead doing it for the person's own use.

One of the best ways of measuring development is the Human Development Index (HDI). It is measured using GDP as well as Adult Literacy and Life Expectancy.

Adult Literacy is the percentage of adults who can read and write.
Life Expectancy is the average age to which a person in a country is expected to live to.
Birth Rate is the amount of births per 1000 per year.
Literacy Rate is the percentage of people (not just adults) that can read and write.
Calorie Intake is the number of calories per person.
Access to Safe Water is the percentage of people who have access to safe water for their needs.
Death Rate is the number of deaths per 1000 people per year.
Find out more about the HDI
Test yourself below on a quizlet test on some of the key terms used to measure Development:
So what are the actual reasons for some countries not being able to develop?

How do we close this gap?

We can close the development gap in countries by using aid. This is help from other countries or places that can help countries to develop. There are four main types of aid. These are: