<
>
An exponential function (graph) is one where the variable (x) is a power. 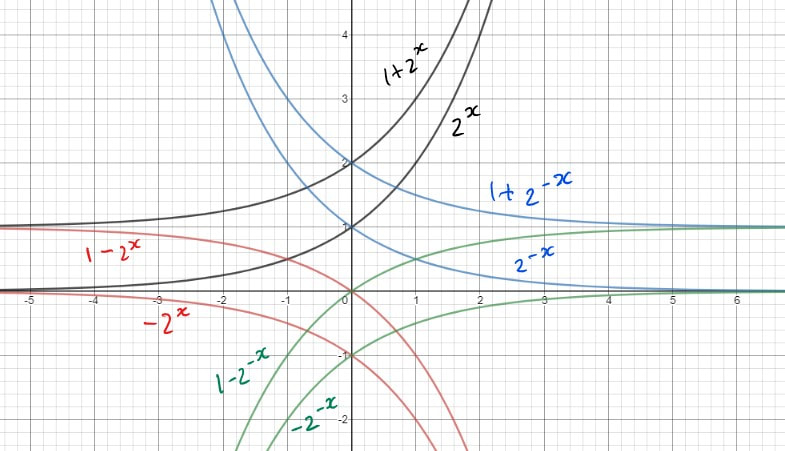 All the examples above have a=2, but a also has an impact on the graph...

As a gets larger (if a>1), y increases as x increases. At the sae time the difference between a with one power and a with the next will become greater. For example, the difference between 2 with power 1 and power 2 is (4-1=) 3; but 3 to the power of 2 minus 3 to the power of 1 is (9-3=) 6. This suggests that as a gets larger the rate of increase increases, and the same happens with the rate of increase. This means as a increases the gradient change of the exponential graph, y, increases so the curve gets steeper. 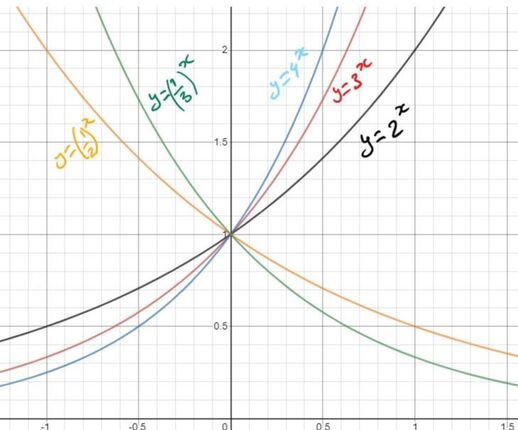 The Graphs on this page where produced with the use of Desmos. We would definitely recommend playing around with this to consolidate your understanding of graphs.
The term 'exponential' is probably most associated with exponential growth and exponential decay where a model, system or situation can be described as having an increase or decrease at an increasing rate.
Exponential Growth - the rate of growth increases as amount increases
Exponential Decay - the rate of decay increases as amount decreases
Such situations are often modelled as...
​​​$$ y = k^{x} $$
where k is the base number and x is the independent variable. (K stays the same while x varies to produce different values of y). There is often also a constant added or multiplied to complete the model.

Above is the graph of this model with the higher, blue line representing a student with a=60, and the lower red line representing a student where a=30. It's worth noticing that the only relevant parts are those with positive values of x as you cannot read a negative number of pages. With this test, the maximum mark is also 100 so anything above this in the y axis is also not relevant.
Therefore, we can use the graph to determine the student who would've gotten 30% without scigo, should read 13 pages to get 100% while the student set for 60% should read 6. Note how we rounded up each time. We did this as it's easier to read a whole page than to guess you've read a specific fraction of a page. It is also worth noting that in reality, there are likely to be many other factors that govern test performance, which could suggest thus model is limited.

​
In another example, the amount of uranium left in a sample after t years can be expressed by the following equation...
$$ m = 1000*12^{-0.001t} $$
Here, m represents the mass of uranium while t is the independent variable and represents time. 12 is the base number. The initial mass of uranium (mass when time is 0, so t=0) is 1000. As t gets larger, m gets smaller given the exponent is negative. This is therefore exponential decay.

Here the x axis should be called the t axis while the y axis is instead the m axis. Again, we are not interested in the time before t=0 so only care about when t is positive. In this graph, you'll also find that m=0 is an asymptote suggesting the amount of uranium can never reach 0. The half life of a radioactive substance is the mount of time it takes for the substance to be halved in mass (half having decayed), which can be read at 500 on this graph from the m axis. Thus suggests the half life is around 280 years.

​
Below (on the left) are the rules for differentiating graphs with e as part of the base number, and (to the right) a demonstration of chain rule which is how the rules were derived.
Note that the gradient of Ae^kx is directly proportional to itself. This means it can be used to model situations where the rate of change of y is proportional to y...

To demonstrate that logarithms and exponentials are inverses we can graph them with the same base...
We can see in both cases that the logarithm (without transformation) has an asymptote at x=0 and passes through (1,0)
You may notice that this is just like the exponential except y=0 has become x=0 and (0,1) has become (1,0). In other words the x and y have switched which is why logarithms are considered the inverse of exponentials. (x, the number that goes into the function, has switched with y, the number that comes out)
This makes sense because with 10^x, x is the exponent and is going in, and the argument comes out. Meanwhile, with log x, x is the argument and is going in, and the exponent comes out.
The dashed black line is along y=x as the inverse of a function is its reflection in the line y=x.
Logarithm Rules
As exponentials have rules, so do logarithms. The rules for exponentials and logarithms both are tabled below...

With an understanding of logarithms, we can now dive further into modelling with exponentials (and logarithms).