Food is one of our essential needs. It provides us with energy we need to live and vital nutrients we need to be healthy.
​
Keywords
Digestion - the breakdown of large insoluble molecules into small soluble molecules
Ingestion - Intake of food (eating)
Absorption - The uptake of soluble nutrients across the small intestine into the bloodstream
Assimilation - Synthesis of larger functional molecules (eg. proteins) from the products of digestion (eg. amino acids)
Egestion - removal of undigested waste
Excretion - Removal of metabolic (cellular) waste
<
>
Different foods have different nutrients which is why we must be aware of what we are eating and should always stick to a balanced diet. A balanced diet is a healthy diet which requires eating a balanced amount of foods containing certain nutrients. For example: someone who ate a lot of burgers and fries for lunch everyday and chocolate cereal for breakfast and then a cheese sandwich and carrots for dinner wouldn't have a balanced diet because it would contain lots of fats (the burgers, fries, cereal and the cheese, to some extent) and only some vitamins (from the carrots).

The nutrients and their functions are given in the table below: 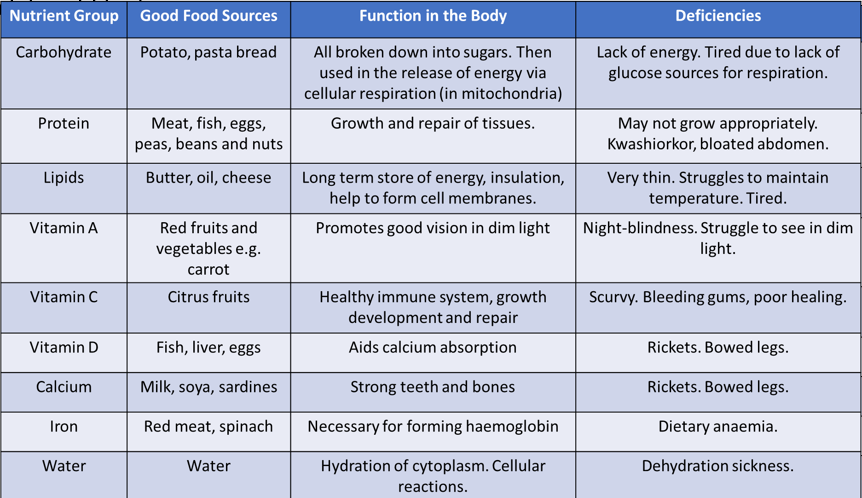 The digestive system is a group of organs (for more information on that please do check out our cells page) that helps your food be taken into your body and crushed. Below is a diagram of the digestive system. 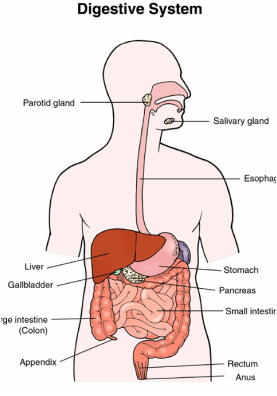 Protein, carbohydrate and fat molecules are too big to be absorbed by your body so they need to be broken down by the digestive system. Watch this short video clip to find out more-
The Digestive System in action

The Digestion of Food

<
>
Mouth
Naturally, the starting place for the digestive system is the mouth. This is where food enters and begins being broken down. Your teeth mechanically digest the food so it is in smaller parts which are easier to digest and absorb. Your different teeth are each responsible for their own respective method of breaking down certain foods based on their shape. The smaller chunks of food are then subjected to he saliva in your mouth. In your saliva, is an enzyme called amylase (a carbohydrase) which starts the break down of any starch by breaking it up into maltose. Additionally, the saliva (produced and released from the salivary glands) serves as a lubricant aiding in the next part of the food's journey after the tongue pushes it down.

Oesophagus
The oesophagus, is a thin, long tube that carries food from the mouth to the stomach via a process called peristalsis - the movement of food through the oesophagus as a result of the contractions of circular antagonistic muscle pairs around it
Stomach
Upon, reaching the stomach, the food is mixed with acids such as hydrochloric acid (HCl) and protease enzymes such as pepsin which breaks down proteins into peptides (which are broken down into amino acids by peptidases later). The hydrochloric acid, secreted by the stomach wall, kills bacteria that travels into the stomach with the food, making the stomach acidic (pH2). Pepsin has a lower optimum pH than most enzymes which is why it is able to work in the acidic stomach without denaturing. In the stomach, the smooth muscle in the stomach wall churns up the food via muscle contractions, mixing it with the enzymes and acid. This is all held in the stomach for several hours by the sphincter muscle between the stomach and the small intestines. The mix of food, enzymes and acid is called chyme
Small Intestines
​Peristalsis moves the food along the small intestines as well as the oesophagus.
<
>
Duodenum
The first part of the small intestine is called the duodenum and receives enzymes and bile from the liver and pancreas.

​Bile is a green alkaline liquid produced by the liver and stored in the gallbladder. It enters the duodenum through the bile duct and mixes with the chyme. As it is alkaline, bile neutralises the acidic chyme to produce the optimum pH (7) for the enzymes to work. Bile also emulsifies lipids to help lipase break down lipids. Emulsion is the suspension of droplets in liquids they can't dissolve into. This breaks up the lipids into smaller droplets which produces a larger surface area for the lipase to work with making it easier to break down  the lipids.
Large Intestine
The large intestine also consists of multiple parts: the colon ​and the rectum, and the digestive system ends at the anus.
Indigestible food like fibre, water and bacteria (waste) travels through the large intestine. The first part is called the colon and is where water is absorbed via osmosis (so most water is absorbed but not all) and what is left is called faeces which is stored in the rectum

Anus and Appendix
Finally, he anus ejects faeces out of the body in a process called egestion (pooing - often confused with 'excretion' which is the expulsion of metabolic waste like Carbon Dioxide).

The appendix, which we no longer use, used to be for the digestion of fibre from sources like grass etc..
This is a detailed summary music video by the YouTube channel sciencemusicvideos​
There are various practicals concerning food and digestion which test, for substances and energy in food.
<
>
Iodine Test for Starch
Benedict's Test for Reducing Sugars
(Reducing sugars are so called because the test involves reducing the alkaline solution copper(II) sulphate to copper(I) oxide. All monosaccharides like fructose and glucose are reducing sugars while some disaccharides like lactose are too. Others like sucrose are not.)

*A water bath could be made by half-filling a beaker with water and placing it on a gauze on a tripod to be boiled by a Bunsen burner. Using a water bath is safer than directly heating the test tube with the Bunsen.

4.2J is the energy needed to raise the temperature of 1 gram of water by 1 degree.

A solution to this problem would be to use a calorimeter as pictured below.
The ignition wires burn the food sample and the heat energy then travels to the water via heat transfer mechanisms (conduction, convection etc.). The water is constantly stirred by the stirrer and the thermometer measures the temperature. 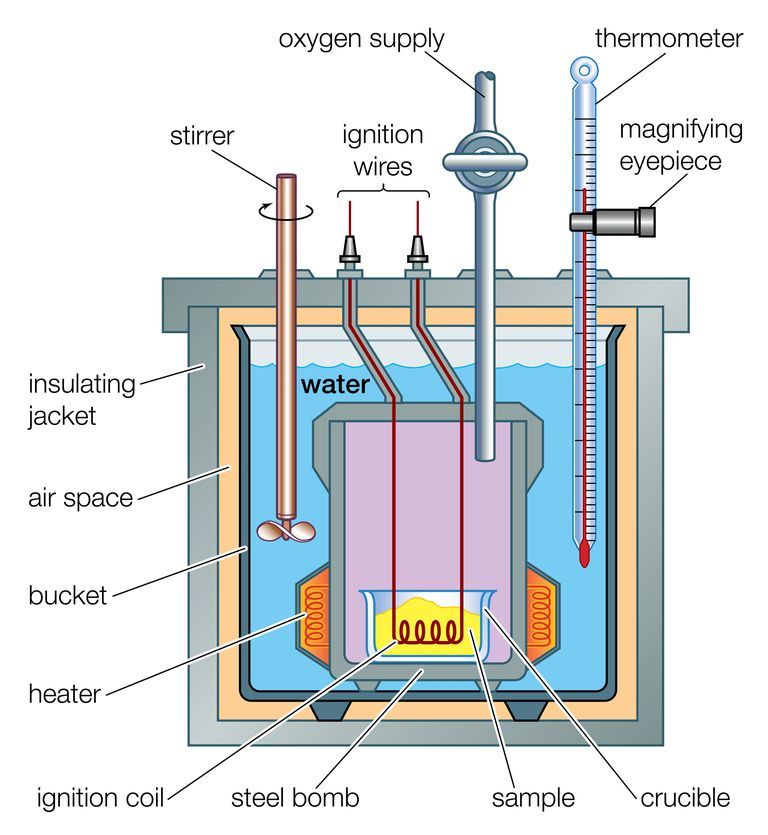