<
>
Forces are vectors so have directions as well as magnitude. If they are in a straight line, they can be added using a sign convention (+ or -)
<
>
Forces can be pushes or pulls. They can change the shape of an object, or its velocity. Forces are measured in Newtons (N) and can be categorised as Contact or Non-Contact Forces:
​
Friction - Is the resistance an object/surface encounters when rubbed against another. When rough surfaces (even on a minute level), rub against each other, the friction slows them down. The smoother the object, the less the friction. Methods of reducing friction include lubrication (the smoothing of surfaces by applying substances such as oil) and reducing the speed of the two objects.
Gravitational Force: Gravitational Force is a force which acts on other objects and pulls them towards the centre of gravity of the object. On Earth, g is roughly 9.81 as that is the Earth's gravitational field strength. Gravitational Force can be increased by moving the objects closer to each other or increasing the size of one of the object. Gravitational Field Strength also has an impact on weight: weight (w) = mass (m) x gravitational acceleration (g)​.
note: gravitational acceleration (g) and gravitational field strength (g) are the exact same thing and value but acceleration is measured in m/s² and field strength is measured in N/Kg
​
Newton's Second Law
(Resultant) Force(F) = mass(m) * acceleration(a)
The force applied to an object will cause an acceleration but often a force will be cancelled by an equal and opposite force so there is no acceleration.
The equation for weight is the same as this one but weight is substituted in for force and g for acceleration.

Resultant Forces
Resultant Force: A resultant Force is the overall force as a result of different forces acting on an object with different amounts of force (N) and different direction. So it is essentially a force that will act the same way all the other forces will act, but just with one force. For example: 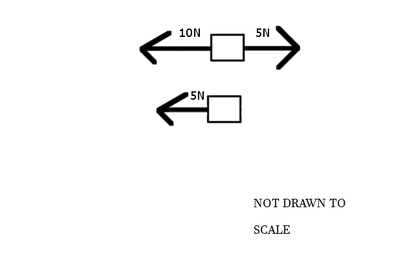 The above free-body diagram (which we use to show the forces acting on an object) shows that the resultant force is 5N (5 newtons) to the left, because in both diagrams the object will be moving to the left, the only difference being that it is through one single force as opposed to there being multiple forces acting in different directions. note: these diagrams must always be drawn to scale​

Balanced Forces: When the sum of the forces acting upon an object balance each other out (the forces are balanced/the resultant force = 0),  the object remains stationary (if it was stationary before) or continues moving without changing its speed or direction (velocity).
Unbalanced Forces: When the resultant force is not 0 the forces are not balanced. Unbalanced forces cause an object to change its velocity (speed and/or direction) and accelerate (which also includes deceleration).
Everything has a centre of mass which can be discovered through experimentation and calculation:
Experiment
Finding the centre of mass for a piece of card, irregularly cut Calculation
​Below is a labelled diagram with the calculation
​m = mass, x = length

A Moment (M) is a turning effect which can be clockwise or anticlockwise and is measured in Nm (newtons * metres). The formula for calculating a moment is as follows:

Equilibrium
When an object is in equilibrium Sum of anticlockwise moments = Sum of clockwise moments
Questions with more than one moment
Diagrams and Questions may show more than one moment and may have moments in opposite directions. You work out resultant forces in the same way however: sum of moments in one direction - sum of moments in the opposite direction
Maximum Turning Effect
If the force is perpendicular to the beam, it has maximum turning effect and when parallel it has none.
Vehicle on a Bridge
​ 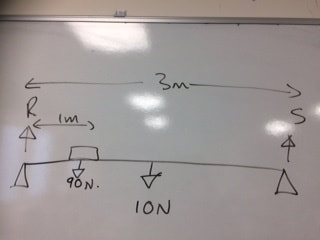 We'll start by figuring out S. In this scenario we can substitute values into the first equation: ((x*Mg) + (y*mg))/l to get:
S = ((1 * 90) + (1.5*10))/3Now we'l figure out R. In this scenario we can substitute values into the same equation but some values are different and we're looking for R.
R = (((3-1)*90) + (1.5*10))/3
R = ((2*90)+ (1.5*10))/3
​​In physics, motion is the change in position of an object over time. Motion is described in terms of velocity, acceleration and speed (as well as time, distance and displacement).
<
>
Speed and Velocity
​Speed is how quickly or slowly something happens. For example: the speed of running  a hundred metres or the speed of hair growing. There are different appropriate units of measurement for the speed of different things but in Physics speed id measured in m/s (metres per second). The formula for working out speed is distance(m) / time(s)
​For cases like the speed of light, speed is written in standard form (refer to maths).
Velocity is essentially the speed but it has a direction. In a distance time graph, the speed can be worked out by finding the gradient.
​
​​Acceleration
Acceleration is the change in velocity. It doesn’t necessarily mean something is going fast. Acceleration is measured in m/s² (metres per second squared) and the formula for working it out is change in speed (m/s) / time (s). Change in speed can be worked out using this: Final speed – Initial speed.
Rest is 0m/s.

You can work out the amount of force that is being used by using: force (N) = mass (kg) x acceleration (m/s²). Force is measured in Newtons (N).  This means if we have a large mass, a large force is needed to accelerate it and if we have a small mass, a small force is needed.

​You may need to rearrange the formulas in order to answer some questions. For example: to find out distance from speed and time or to work out the change in speed from the acceleration and time.

Ticker Timers
A ticker timer is a device that will make a mark on tape passing through it every 0.02 seconds. Using this fact, and the distance between the dots, the velocity of a moving object attached to the tape can be calculated: v = d/0.02. It is wisest to measure the distance between dots which are 10 dots apart so the equation becomes: v = d/0.2.

-Thinking Distance
Factors that increase Thinking Distance
Higher speeds
Fatigue of the driver
Alcohol/drug abuse (only counts as one reason)
Distractions
Poor visibility
​Distance-Time Graphs
The gradient of a distance-time graph tells you the speed it is travelling at:
A flat line is an object which isn't moving, while it's y-axis(distance) tells you how far it is from a reference point.
A line going downwards moves towards the reference point while an ascending line moves away.
A curved line shows an accelerating (or decelerating) object
Velocity-Time Graphs
A velocity-time graph differs to a distance-time graphs in the y axes being velocity (m/s) instead of distance (m).