Energy is absolutely essential to life: it is used by all the cells in the body for processes like protein synthesis, cell division, movement and active transport. This energy comes from a process called Respiration. Respiration is one of the seven life processes but often confused with breathing. Respiration is the process of producing energy through the chemical break down of glucose.

Some of the energy released from respiration (which is exothermic) is released as heat energy and contributes to the regulation of body temperature. Most of it, however, is stored as a molecule called adenosine triphosphate (ATP)​. ATP is similarly produced by a complicated process but this can also be simplified: 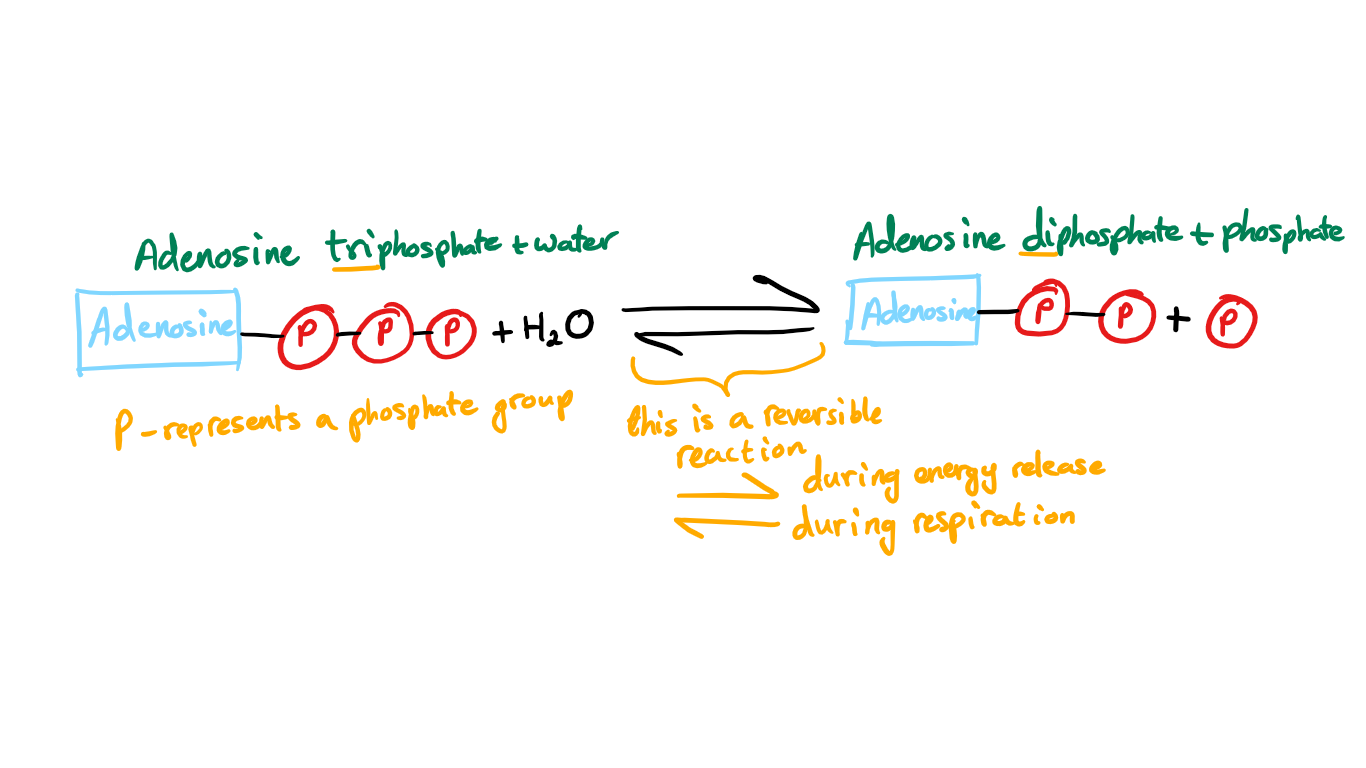 During respiration, ATP is produced from ADP (adenosine diphosphate) and the third phosphate group while, when energy is released for metabolic (cellular) reactions the ATP (which is fairly unstable) reacts with water through a process called hydrolysis and produces ADP and phosphorous, releasing energy in the process.

The Respiratory System starts with air entering the body from outside through the mouth or nasal cavity. The air then passes through the larynx (voice box) and into the trachea. The trachea (windpipe) then splits into 2 smaller tubes called the bronchi (sing: bronchus) which lead directly into the lungs. The bronchi split into smaller structures called bronchioles which each lead to an alveolus (air sac).

​Gas exchange in humans happens in these alveoli , where Oxygen is taken in and Carbon dioxide is given out via diffusion​.
We need Oxygen to carry out aerobic respiration in order to release energy, and we need to get rid of Carbon dioxide because it is acidic and if it dissolves into out blood, the pH will decrease and so fewer enzymes will be able to work in their optimum conditions.
The alveoli are adapted for gas exchange as they have a large surface area, a damp/moist lining, a good, constant and circulated blood supply and a 1 cell thick lining (thin).
​ 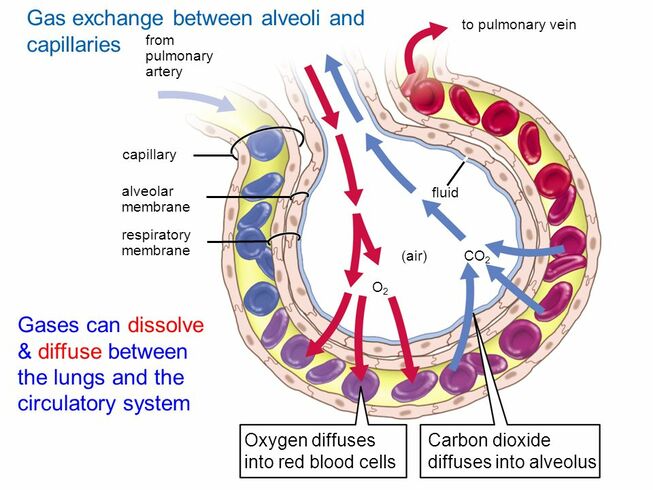 A common misconception is that breathing or ventilation is a sucking motion that pulls in air. Actually, the intake of air (inhalation/inspiration) and the expulsion of air (exhalation/expiration) is dependant on pressure within and outside the lungs.

The above diagram displays the thorax (chest cavity). At the top is the larynx which leads into the trachea. The trachea, unlike much of the rest of the body, is supported by cartilage rings instead of bone as cartilage is more flexible. The rings are also 'C' shaped to leave a space for the trachea to expand. This means that the trachea is able to take in air from inhalation without being damaged. Additionally, it allows space for lumps of food to travel down the oesophagus (which is right next to the trachea) without getting caught on the cartilage.

Ventilation
​The air that enters the trachea, however, moves in due to the differences in pressure. The air moves from high pressure to low pressure. When we breathe in (inhale), the diaphragm contracts which increases the space in the airtight thorax. Simultaneously, the external intercostal muscles (outer) contract causing the ribcage to move up and outwards increasing the volume inside the thorax. As the volume increases, the pressure decreases which causes air to rush into the lungs.
When we breathe out (exhale), the opposite happens: the diaphragm and external intercostal muscles relax (internal intercostal muscles contract) and so the rib cage moves down and in and the thorax decreases in volume. This means (particularly because of the air that was inhaled) that the pressure increases to above atmospheric pressure and so the air rushes out.

Additional Functions and Smoking
The pleural cavity is the space between the pleural membranes which are the membranes surrounding the lungs and the membrane within the thorax. The cavity is filled with pleural fluid which lubricates the lungs so they do not stick to the chest wall.
​
The rib cage protects the lungs and heart from damage and the heart pumps blood into the lungs through blood vessels so gas can diffuse into and out of the blood.

The trachea is lined with a layer of cells. Some of these cells: goblet cells secrete mucus which traps dirt and bacteria. The other cells are called ciliated epithelial cells and are covered in hair-like structures (cilia) which sweep the mucus and trapped particles/bacteria out of the trachea towards the mouth. One of the issues of smoking is that tar - one of the components of cigarettes - damages the cilia so they can't do their job. This causes the mucus to sit in the trachea so smokers cough excessively to get rid of it. Excessive coughing can result in damage to the alveoli resulting in problems like emphysema. This also means the bacteria and other pathogens stay in the body which can lead to infections and problems such as bronchitis.
Smoking can also lead to cancer as it contains many carcinogens which cause mutations resulting in uncontrolled mitosis (cell division) leading to a tumour. In addition, carbon monoxide from smoke reacts permanently with haemoglobin in blood instead of oxygen causing a lack in oxygen. Despite these issues, many people smoke because the nicotine in tobacco is addictive.