Key terms:
A watershed - The divide between two drainage basins
The source - The place where a river starts
The mouth - the end of a reiver where it reaches the sea
Confluence - The point at which multiple tributaries/ rivers meet
Tributary - A small river or stream joining ontona main river
A channel - Where the river flows
Drainage basin - The area of land drained by a river and its tributaries 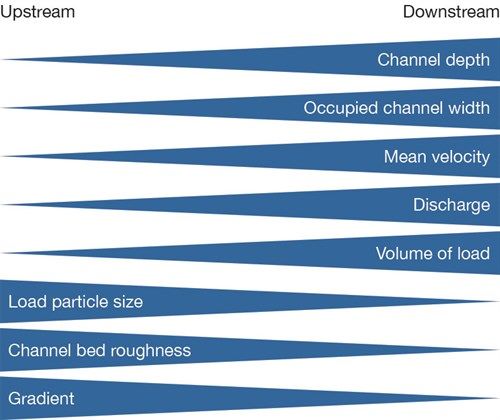 Erosion, transport and deposition
There are four methods of transport in rivers:
Solution- Minerals are dissolved in the water and are carried along in solution
Suspension- fine, light material is carried along in the water
Saltation- small pebbles and stones are bounced along the river bed
Traction- large boulders and rocks are rolled along the river bed
Erosion:
Vertical erosion makes a channel deeper - this happens more in the upper course of a river
Lateral erosion makes a channel wider - this mainly happens in the middle and lower course of a river
Deposition:
There is little already eroded rock carried in water at the source and so there is litte deposition but the load gets more fine the longer it is in the river and by the lower course, there is only alluvium deposited.

Landforms of the upper course:
Potholes are formed when stones on the river floor create eddie currents which form holes by abrasion and hydraulic action as the obstacle directs the energy of the water downwards. 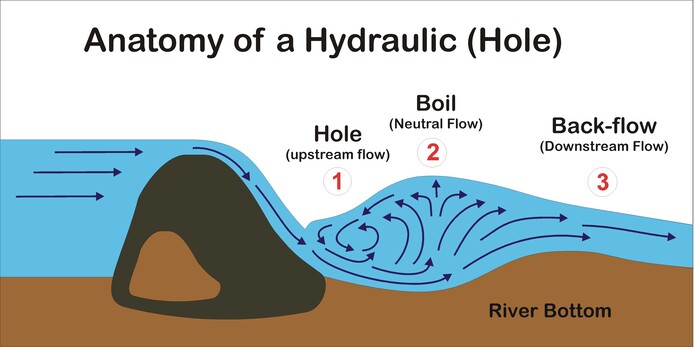 Interlocking spurs ​occur because it is easier for the water to go around resistant rock than to break through it.