​Biology is the scientific study of life

This is no philosophical question. Well... maybe it is but, as far as biologists are concerned, life is whether something carries out all seven life processes. So... what are they?
We like to remember these with the mnemonic: MRS GREN
*Excretion is often confused with egestion. Egestion is the removal of digestive waste and not metabolic waste. An example is faeces.

Homeostasis
Sometimes considered the eighth life process, this is the maintaining and controlling of the organism. For example, controlling cell turgidity, body temperature, water/glucose in the blood.

Human cells start off as unspecialised stem cells which differentiate to form the various cells of your body which are each specialised for their purpose. These cells vary from blood cells to sex cells (gametes) to skin cells and wouldn't be what they were if it weren't for specialisation.

Enzymes work using collision theory which states that particles need to hit each other and in the right way for a chemical reaction to take place. As a result, the hotter the temperature, the more the particles move so the more likely they are to have successful collisions. This means the enzymes work better in higher temperatures. But if the temperatures get too high, enzymes denature (stop working due to deformation of the active site). When an enzyme is too far from it's correct pH (acidity of environment) it also denatures.

When the temperature or pH is at it's best for enzyme efficiency, it is called: optimum​ temperature/pH

Organisms and Microorganisms - an organic summary

All organisms can be split (​classified) into 5 kingdoms​...
<
>
Cells: Animals are multicellular organisms without cell walls and are eukaryotic (their cells have nuclei).
Food: Animals are heterotrophic (feed on others) and eat other animals or plants
Carbohydrate Store: Animals store carbohydrates as fat (glycogen and polysaccharides)
Examples: Humans, Wolves, Mosquitos, snakes, falcons
Cells: Plants are multicellular organisms with cell walls of cellulose and are eukaryotic (their cells have nuclei).
Food: Plants are autotrophic (self feeding) and produce food via photosynthesis. (making them phototrophic)
Carbohydrate Store: Plants store carbohydrates as starch (and sucrose)
Examples: Pea plants, Maise plants, Trees, Cereal, Fern 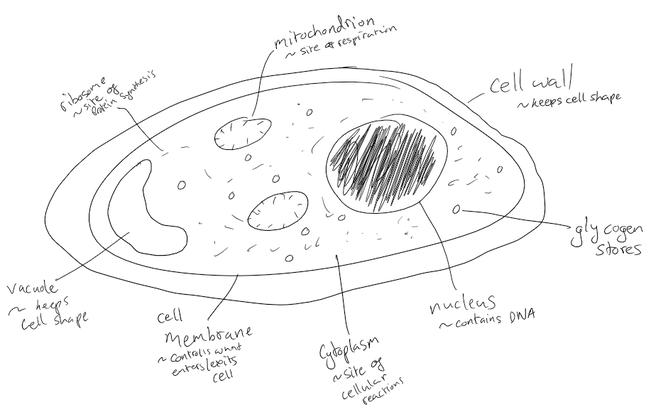 Cells: Fungi can be multicellular or unicellular organisms made of hype with cell walls of chitin and are eukaryotic (their cells have nuclei).
Food: Fungi are saprotrophic (feeds on dead organic matter) and feed by secreting extracellular digestive enzymes to break down the dead material into smaller soluble molecules that they then absorb.
Carbohydrate Store: Fungi store carbohydrates as glycogen (as seen in the above diagram)
Examples: Yeast (unicellular), Mucor (multicellular), Penicillium (multicellular), Mushrooms, Torula

note: The hyphae are not divided into separate cells 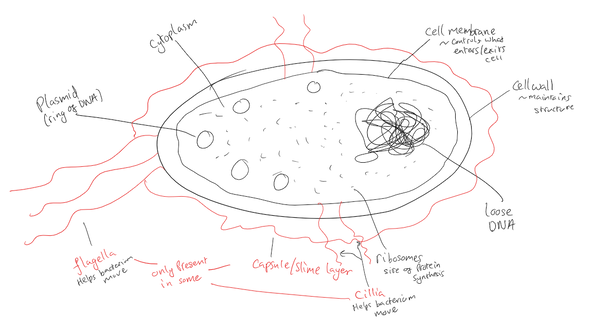 Cells: Bacteria are unicellular organisms with cell walls of peptidoglycan and are prokaryotic (their cells don't have nuclei). Instead, their DNA is left loose in the cytoplasm or in rings called plasmids (not all bacteria have plasmid). They can also have flagella, cilia and/or a capsule.
Food: Bacteria can feed on living or dead organisms. Some also have a form of chlorophyll so can photosynthesise
Carbohydrate Store: Bacteria don't store carbohydrates
Examples: Lactobacillus (helpful), Pneumococcus (harmful), salmonella bacterium (harmful)
This is effectively the kingdom for everything that doesn't fit into the other kingdoms.
Cells: Protoctista (protoctists) are unicellular organisms usually though can be multicellular with cell walls of protein (though not always) and are eukaryotic (their cells have nuclei).
Food: They can be autotrphic (feed themselves) and photosynthesise
Examples: Algae, Amoeba, Plasmodium, chlorella
They are often broken up into the more animal-like protozoa and the more plant-like algae.

Miroscopy and other skills

The image below from this source shows a light-microscope, labelled.