Just like in English, Latin verbs are very important. Verbs come in their tense, person and number (as well as conjugation).
Latin verbs change endings (conjugate) based on these factors.
Tense Person and Number Conjugation
Verbs also have conjugation. This depends on their stem. The stems can determine how some verbs conjugate and stays the same in most cases so can be grouped into any of 5 conjugations.

Below is a table of verb endings (added on to the end of the stem)
*The future tense endings above are only for the 1st and 2nd conjugation, the 3rd and 4th endings are as follows:
Imperatives and Infinitives
Imperative - a command: 'Do!'
Imperatives are typically just their stem in the singular and add an -te to the end for the plural:
Porta! - Carry
Portate! - Carry (pl)
Mone! - Warn
Monete! - Warn (pl)
Audi! - Hear
Audite! - Hear (pl)

Infinitive -'To Do'
The infinitive is the second principle part of a verb and is 'to do' an action. In Latin, they have an -re on the end (in addition to the stem):
​Portare - To carry
Monere - To warn
​Audire - To hear 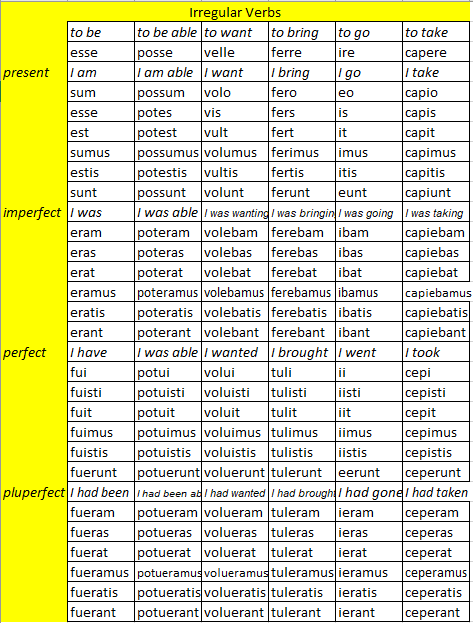